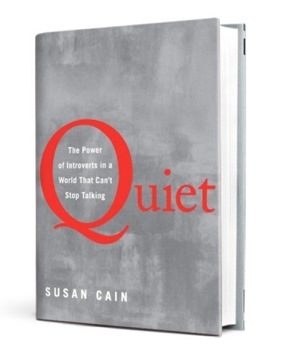 Challenging many assumptions about giftedness and effectiveness, Susan Caine’s book Quiet is a must-read for all interested in seeing people thrive in any walk of life – especially shy people who often think they don’t fit in.

Here are a couple of extracts from Chapter 2, on ‘The Myth of Charismatic Leadership’:

Contrary to the Harvard Business School model of vocal leadership, the ranks of effective CEOs turn out to be filled with introverts, including Charles Schwab; Bill Gates; Brenda Barnes, CEO of Sara Lee; and James Copeland, former CEO of Deloitte Touch Tohmatsu. ‘Among the most effective leaders I have encountered and worked with in half a century,’ the management guru Peter Drucker has written, ‘some locked themselves into their office and others were ultra-gregarious. Some were quick and impulsive, while others studied the situation and too forever to come to a decision… The one and only personality trait the effective ones I have encountered did have in common was something the did not have: they had little or no ‘charisma’ and little use either for the term or what it signifies.’ Supporting Drucker’s claim, Brigham Young University management professor Bradley Agle studied the CEOs of 128 major companies and found that those considered charismatic by their top executives had bigger salaries but not better corporate performance.

According to a famous study by the influential management theorist Jim Collins, many of the best-performing companies of the late twentieth century were run by what he calls ‘Level 5 Leaders’. These exceptional CEOs were known not for their flash or charisma but for extreme humility coupled with intense professional will… The lesson, says Collins, is clear. We don’t need giant personalities to transform companies. We need leaders who build not their own egos but the institutions they run.’